What happens if Prince died without a will?

News reports have surfaced that Prince died without a will. I don’t want to say too much too soon but here’s an interesting question. Prince had some very particular ideas about how to manage his artistic repertoire. A will or trust would have provided an opportunity for him to…Read More

More–but only a little–about the Holliday case

The Estate of Sarah D. Holliday Tax Court case mentioned briefly last month was a win for the IRS but hasn’t generated much buzz in the estate planning community. Essentially, the Tax Court held that the late Ms. Holliday’s family limited partnership was nothing more than…Read More

The IRS must have been celebrating more than St. Patrick’s Day yesterday. The Tax Court gave it a rare victory and held that a family limited partnership had not been formed for any non-tax reasons and hadn’t been operated with the necessary business formalities. The case…Read More

Written by Jim Worthington on February 25, 2016

See the latest issue of Attorney at Law magazine for Jim Worthington’s article about digital assets. 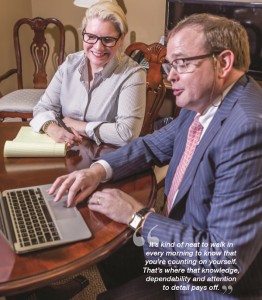 Attorney of the Month

Keeping Up to Speed with Changing Legal Environments